Brad Pitt: Fatherhood Has Made Me a Better Man 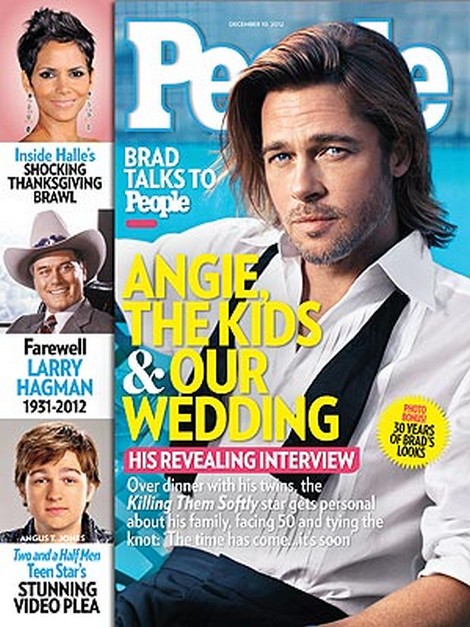 It has been a wild year for Brad Pitt. He has 6 kids to juggle, a busy acting career and he finally is engaged to Angelina Jolie.

While promoting his most recent film, Killing Them Softly, he recently sat down to talk about what has been happening in his life and upon reflection he tells the latest issue of People Magazine that:

Angelina, or “mama” as he calls her, has worked more which means that he spent more time than usual on daddy-duty. It’s a job that the actor has come to really enjoy because it makes him be less selfish and focus on others.

Has fatherhood made him a better man?

“Absolutely,” Pitt says. Being a dad “takes you right off yourself.”

As for the much anticipated wedding, he said the couples main plan is to “Keep it simple. Keep it simple – really.”

Do you think he and Angie will ever really tie that knot? I suspect he is ready, but she seems to always find a reason to postpone exchanging those vows!

Also in the latest issue of People you’ll find all the details on that bloody Thanksgiving brawl at Halle Berry‘s house that left fiance, Olivier Martinez needing medical attention and baby-daddy, Gabriel Aubry holding a restraining order. All the ugliness stems from that dragged out custody battle over little Nahla. Halle requested that the court allow her to move to France with the girl and when her request was denied, Gabriel insists that she is now trying more drastic measures to cut him out of Nahla’s life.

Anna Faris Takes a Hike With Her Sleeping Baby