Report: Jennifer Lopez Lets Her Twins Run Wild and They Almost Get Electrocuted 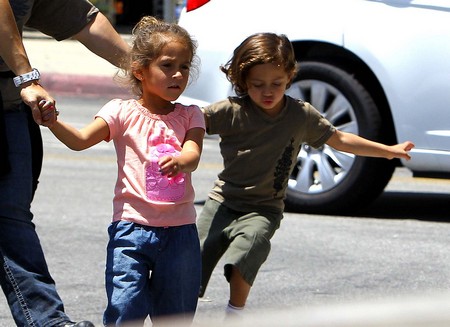 Jennifer Lopez’s twins seem to be a real handful on their mom’s current tour! According to an exclusive RadarOnline article, Max and Emme, both 4 years old, have been running like crazy backstage while their mother rehearses for her concerts with Enrique Iglesias.

They have been a nuisance to stage hands and several sources believe it is a miracle that they haven’t been electrocuted yet!

“Jennifer has absolutely no control over her children,” a source said. “When she’s rehearsing for the show and Casper is on stage with her, the kids are left pretty much to their own devices without much supervision. That’s when all hell breaks loose and Max and Emme embark on a self-destructive path. They run around, kicking out wires, getting in the way of stagehands and are a real problem. Worse still, Jennifer or Casper have said nothing about it — telling the stagehands they are 4-year-old kids and it’s to be expected. But they have been breaking expensive equipment and making life difficult for everyone. It’s a miracle they haven’t been electrocuted yet because the lighting systems are very dangerous.”

Their mother should think about paying more attention to them, because a tweaked out kid is more dangerous than a recently rebooted career. The source revealed, “The twins are complete brats with zero discipline, and Jennifer isn’t behaving like a responsible parent.”

How can J.Lo possibly behave like a responsible parent when her toy boy is just under half her age? Silly, silly woman…

Baby Blowouts: How To Deal?!