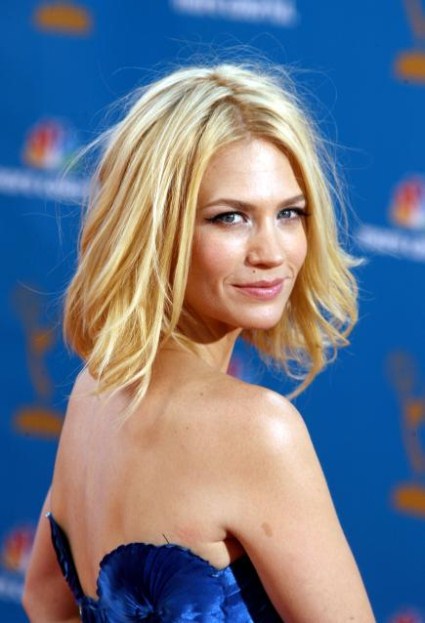 January Jones is a super stylish Mom. She also has to juggle motherhood with a starring role on Mad Men. The 34 year old went back to work when her little boy Xander Jones was around two months old ‘I think I went back to set six or seven weeks after, so he was really little‘ she told People.

But the actress says she wasn’t separated from her son completely. They were on set every day. ‘I had the baby and the baby nurse in their own room so I could go back and feed him every two hours. If I felt like he needed me, or if he needed to eat, or even if I just needed a squeeze because I was having separation issues, I would go back and see him. It was such a blessing that I wasn’t separated from him. It was hard to work long days and then go home and not sleep.’

But January does have a secret weapon to looking so good despite her demanding schedule and it’s not what you’d expect. She pops placenta vitamins. Yes – you read that right – placenta vitamins. What are they? ‘Your placenta gets dehydrated and made into vitamins. It’s something I was very hesitant about, but we’re the only mammals who don’t ingest our own placentas. It’s not witch-crafty or anything! I suggest it to all moms!’

And she’d like to stress she’s very different to her on screen persona ‘I think my fans make cracks about it, but they don’t actually think I’d bring any of Betty’s parenting into my own life‘

Hilary Duff: “Wow, I Can’t Believe I Have A Baby!”