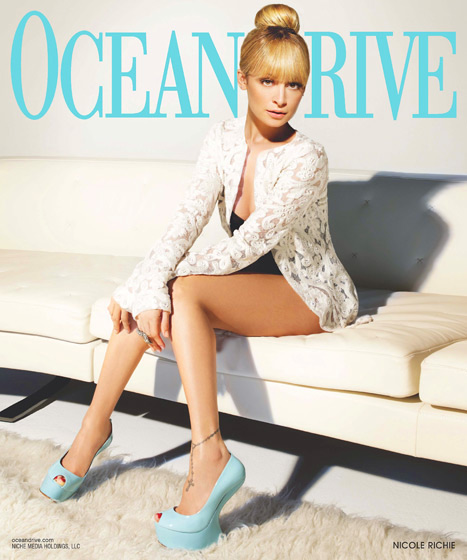 Nicole Richie covers the March 2012 issue of Ocean Drive Magazine.  Richie who look stunning in a lace sweater over a black bodysuit and blue heels opens up about  the personalities of her two children.

Richie explains that her children wwith Good Charlotte rocker Joel Madden are an equal mix of both parents, but they’re also complete opposites.

“My daughter looks exactly like me, and she has Joel’s personality. She’s very careful,” Richie tells. “She doesn’t make a move without fully thinking about what the consequences would be and what that means.”

Richie’s 2-year-old son Sparrow “looks exactly like Joel and has my personality. He’s just wild. I’m in for the ride,” the Fashion Star mentor says. “We’ve had broken fingers, we’ve been to the hospital — you cannot take your eye off of him for a second. He is just a full, free spirit.”

Richie admits that when she first got together with Madden in 2006, they were “polar opposites.”

“He’s from southern Maryland. He’s very family-oriented,” she tells. “He grew up with four brothers and sisters. When we met, I was definitely going through a difficult time with my family, and having him have such a strong foundation really opened the doors and brought both of our families together.”