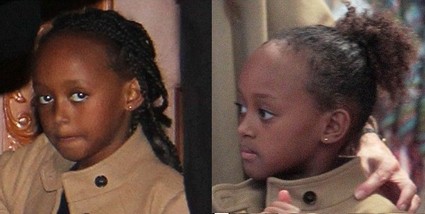 Angelina Jolie and Brad Pitt’s six-year old daughter Zahara got herself some extensions.  She was spotted with the new do when she was with her parents in Las Vegas where they were having a family break and celebrating dad Brad’s birthday.

While in Las Vegas ten-year-old Maddox, Pax, seven , Zahara and five-year-old Shiloh headed out with their parents to see Michael Jackson: The Immortal World Tour which celebrates the work of the late Michael Jackson.

I think it suits her a lot she looks great!  What do you think?  Sound out in the comments below!