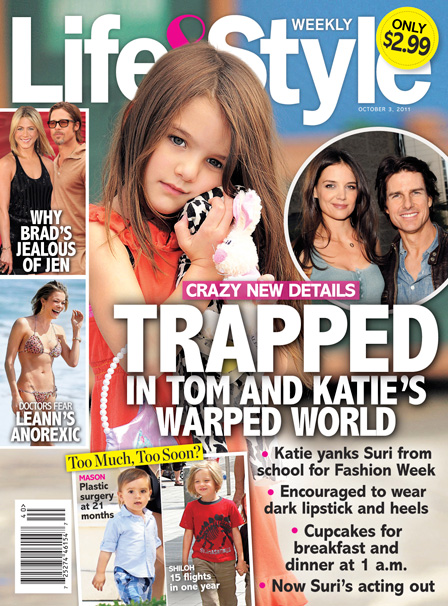 In the October 3rd, 2011 issue of Life & Style their cover story is ‘Hollywood Kids: Too Much Too Soon’.  The story features Suri Cruise daughter of Tom Cruise and Katie Holmes.  The magazine claims to have the crazy details on how Suri is trapped in Tom and Katie’s crazy world.  The go on to claim that Suri was pulled out of school to go to Fashion week and that they encourage her to wear dark lipstick and heels.  This lipstick claim stems from pictures that were recently released of Suri at Chelsea market wearing red lipstick.

A former employee says: “Because Suri is being raised a Scientologist, both Katie and Tom have to treat her like an adult. There’s no coddling, and they never tell her anything — they ask. So when she wants to wear her Cinderella costume to bed, she gets to. When she demands a manicure at 9 p.m., she gets it.  And that includes treats for breakfast! “

Rumor has it Suri is becoming a very spoiled little girl and acting out a lot.  They may think it is all very cute right now, but wait till she gets into her teens and starts demanding her way.  I see a Lindsay Lohan type daughter in their future!

What do you think?  Is Suri growing up too fast?  Is this all too much for a five year old?  My vote is YES and they better hold on to their seats when she becomes a teenager!

Tiffani Thiessen’s Daughter Is No Longer A Baby