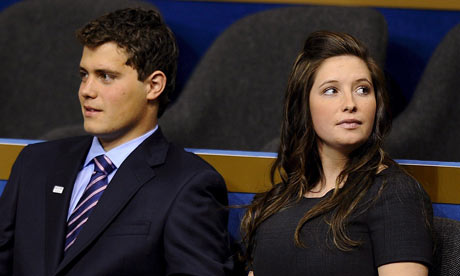 Bristol Palin, who is the mother of 2-year-old Tripp, lost her virginity to Levi Johnston while drunk. Palin was drunk on wine coolers, which eventually led her to have the sex with Levi that lead to being pregnant with Tripp. Bristol claims that she doesn’t remember a thing. When she woke up in the morning, Levi was gone. How romantic.

In “Not Afraid of Life: My Journey So Far,” Bristol’s memoir, it says that the couple used condoms, but ended up getting pregnant anyway. Bristol says that when she told Levi, he responded by saying, “Better be a f**king boy.” Seems like a match made in heaven.

Sarah Palin, the mother of Bristol, was very shocked when she found out and didn’t even know that Bristol was sexually active. The doctors asked Levi if he wanted to cut the cord and he said, “gross.” The honors were then turned over to Sarah.

Continuing in her memoir, Bristol says that Levi cheated on her constantly and often came home drunk, clad with hickeys all over his neck. Things ended with the couple when Levi claimed to have gotten another girl pregnant and that he was going to name Bentley, which was the couple’s first choice when naming Tripp.

Let this be the perfect example to everyone out there of how exactly you don’t want your relationship to be.

Heidi Klum Takes The Whole Family For a Walk