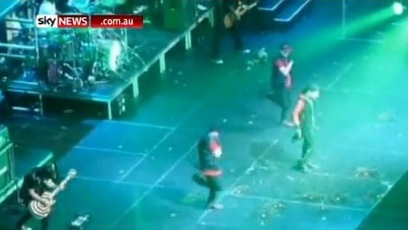 A teenager from Sydney, Australia has been arrested and charged after allegedly pelting Justin Bieber with eggs during a gig.  Justin was performing at the city’s Acer Arena on Friday night when a then unknown assailant threw a number of eggs at him from the roof during a dance routine.
.
Bieber narrowly avoided being hit as two messy missiles smashed as his feet, while another four splattered across the front of the stage.  On Thursday morning a 17 year old was arrested at his home in Sydney for allegedly clambering onto the roof of the venue and dropping the eggs on to the stage.
.
He was taken to Waverley Police Station, where he was charged with breaking and entering, trespass and malicious damage.  The teenager has been released on conditional bail and is due to appear at Parramatta Children’s Court on 2 June, 2011.
Continue Reading