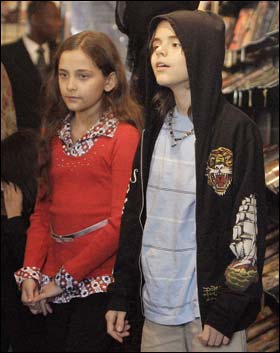 Michael Jackson’s children Prince and Paris Jackson have the acting bug.  Both have auditioned for their school play “Brothers Grimm” a classic fairytale.  When they were on Good Morning America last week they expressed interest in auditioning.

The show’s called “The Brothers Grimm Spectaculathon” … and it crams 209 classic fairy tales — like “Snow White” and “Cinderella” — into a single jam-packed play.

So far, no word on who got what role — if any — but the odds are in their favor … because the play has nearly 50 characters in it.

Nice to see how great that the kids are adjusting!

Denise Richards With Her Daughters Sam and Lola in LA